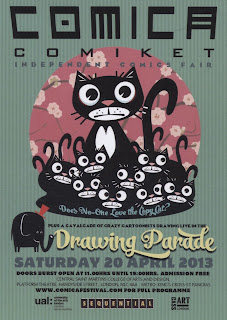 An very early start, a train journey, a little confusion finding the new venue, a little more confusion finding the room with our table in it and then we were good to go.
A new venue is always a worry, and one that moves the event further from busy streets of people even more so. We were therefore doubly worried as we looked at the large number of books we had lugged all the way from Euston Station. Would we sell enough to make the return trip less painful ?
As is always the case with pretty much every Con we've ever been to, it was a slow start.
We had three new books since the last show, WesterNoir 2, Missing - Have You Seen The Invisible Man? and Who On Earth Was Thaddeus Mist?, so we had brought more copies of those than the other books in the hope that we'd get some return customers. We also had some special WesterNoir packs which included a wonderful sketch from series artist Gary Crutchley.
We were ready.
We were still ready about 30 minutes later when we made our first sale and it was fairly constant after that. At the end of the Con we'd sold everything we'd taken except for 5 books.
We had plenty of returning customers and a number of new ones.
We chatted with fellow creators, old friends and new (you should check out Apes'n'Capes from Dead Universe Comics if you want to read something that'll make you think, want to look at again just to enjoy the art and want the next issue to be available tomorrow) and chatted to film directors (or friends of film directors... they're an enigmatic bunch so it's hard to tell).
The organisers worked tirelessly throughout the day to make the show so different to others. The Drawing Parade was a big hit again, allowing us to witness (on a big screen) the process that the different artists went through to produce their work.
We're already looking forward  to the next one, which'll be in October I believe.

Accent UK will be at the Comica Comiket this Saturday.

If you're in the London area on Saturday, then it'd be great to see you are the Comica event. Always a favourite event of ours and different to anything else in the UK.
Posted by Dave West at 15:48 No comments:

Thanks to Joe Gordon for the photo of the busy Mr Mathieson at the Dundee Comics Expo. 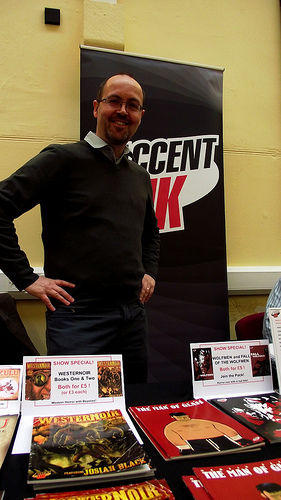 From Dundee to MoCCA...

Colin had a great Convention in Dundee last week and as I type this he and his son Scott are in New York at this year's MoCCA. I couldn't make it out there myself this year, so I'll be missing out on a great few days. Please pop in and say 'Hi' to the guys if you're in NYC this weekend.
A very busy man indeed Colin has also been interviewed over at Panel Borders.
''...publisher Colin Mathieson discusses his company Accent UK which has built up a commendable body of work over the last dozen years concentrating on anthology books which have showcased the work of some of the country's finest small press creators. Artist Conor Boyle joins the conversation to talk about Accent's latest graphic novel Who on Earth was Thaddeus Mist? and the imporatance of design to the company's range of books''.
It can be heard at 8.30am, Monday 8th April, repeated 3pm, Thursday 11th April, Resonance 104.4 FM / streamed at www.resonancefm.com / extended podcast after first broadcast at www.panelborders.wordpress.com.
I think Colin deserves a rest when he gets back from the USA. Well, until the Comiket in London on the 20th April anyway...
Posted by Dave West at 14:33 No comments: