MOCCA, a great show in a great city.

Last year we promised ourselves that we'd do a show a year in the USA, and try to fit as many around this in the UK and Europe as we could, and so we had a table (shared with the guys from Tales From The Parent's Basement) at Seattle's Emerald City Con. It was very enjoyable but we did feel the Con was a little too mainstream for us, and so this year we agreed to look at other Conventions.
We've heard a lot about MOCCA, mainly I guess from Steve Bissette, but also from a smattering of other creators. Based in New York it promised a lot of attendees, but more importantly, for us, everybody talked about it being very much a 'Comic Convention' in its truest sense, and very much Independent creator/publisher focussed. We have actually tried to get a table at this previously, but never been lucky as it sells out pretty quickly. This year, however, we timed it just right and we got one.
The AccentUK crew this year consisted of myself, Colin and his son Scott. So we had three luggage allowances to exploit, which resulted in 4 boxes of comics. As we weighed in at Manchester Airport, we were happy to see that all the bags were pretty close to the 24k limit. The question was would they come back much lighter, or would we end up having to lug all of our comics back home again, ah, the life of an Independent Comics Publisher/Creator.
No real hiccups travel-wise saw us arrive pretty much on schedule, 7th April, on a warmish afternoon in New York's JFK airport. We got through Customs as quickly as possible, and were checked in and wandering the streets... or should that be blocks... of New York by around 3pm, looking for food and drink. It's amazing walking by buildings that you're so familiar with from photographs, tv programs and movies.
We wandered passed The Chrysler Building 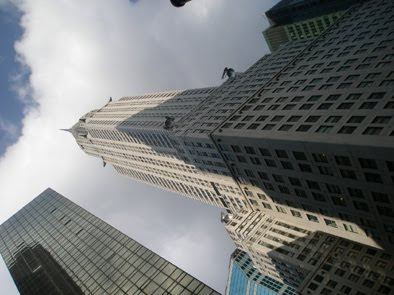 and Empire State Building to end up having a bite to eat in Grand Central Station, after wandering around Times Square for a while. 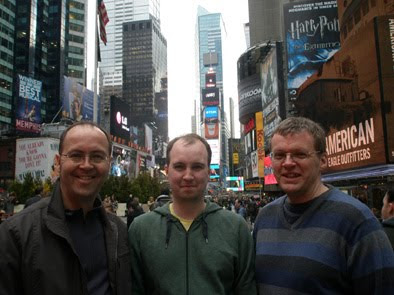 On the 8th, the day before the Con, we visited the Museum Of Modern Art (MoMA), Midtown Comics and The Strand (the mother of all bookstores). We ate too much (it didn't seem possible to get a meal that isn't supersized) and were still tired from the flight, and time difference. The 9th arrived and we were ready. A quick walk to the Armories 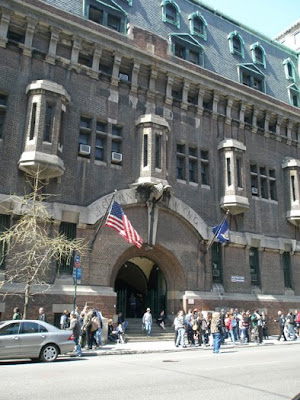 from the Hotel (both are on Lexington Avenue) saw us arrive before most and allow us time to soak in a little of the atmosphere before setting up our table. 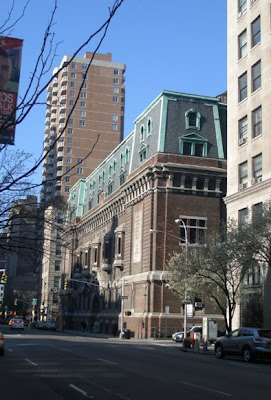 Cliodhna Lyons had arranged all the creators from the UK to have their tables together, which also included Sarah McIntyre and Ellen Lindner, so we had quite the little enclave, with bunting diverted from some royal wedding or other letting everyone know that the British had arrived. 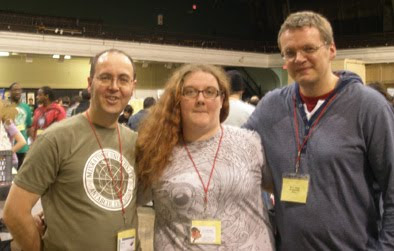 The first creator we met that was from the US was Maurice Murdock (http://www.murdockink.blogspot.com/), who was sharing half of one of the UK tables and accomodating enoough to let us arrange where he would be positioned. The doors opened at around 11am and as seems to be traditional, we made our first sale at 11.40am. A slow start but it was pretty steady from that point on and by the end of the first day we had sold more than we did at the entire Emerald City Con. 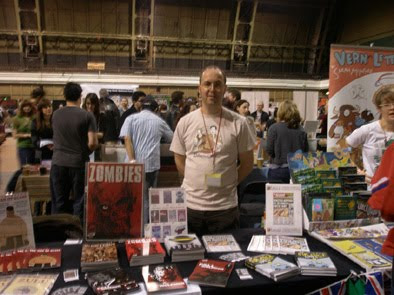 During the day we met a few of our American AccentUK contributors :- Morgan Pielli, Jonathan Baylis and Charles.D. Chenet where all at the event, either selling their books, networking or both. It was great to see Martin Flink again as well, not a native to the US of course, Martin had travelled over with an impressive number of Danes and spent most of the weekend sat behind their tables sketching, signing and generally impressing people. 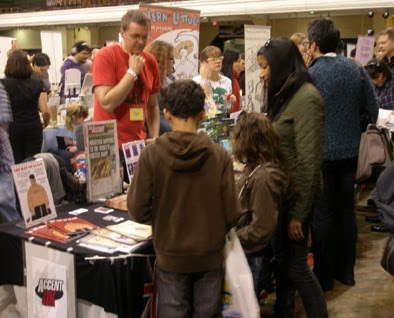 The surprise of the Convention however was on meeting Ed Traquino again. Ed was a regular on the Independent UK Comic scene a few years back before disappearing, to America it seems. 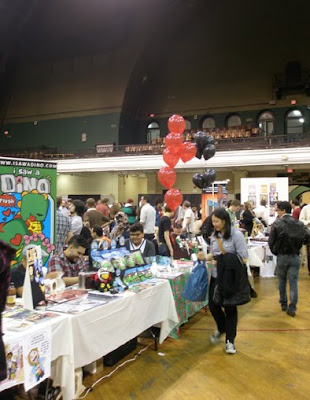 A relatively quiet night for us, the jet lag was getting worse rather than better, and we were up again redy for Day 2. We didn't expect the second day to be as busy as the first, but we sold more books on Sunday that we had on Saturday, which isn't typical. This may have been the result of Martin Flink sitting with us for about an hour, signing and sketching copies of The Man Of Glass 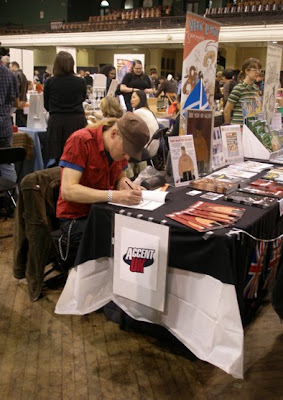 or maybe that the people on the Sunday hadn't been on the hall on the Saturday, either way, we had a very productive day. 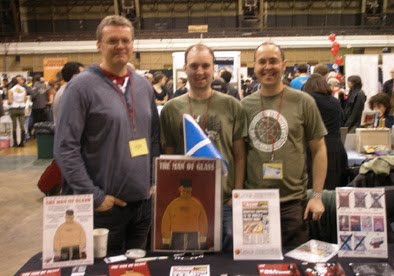 I spoke to a number of people about Digital Comics, how to get onto Comixology and what it was like for Independent creators. The general view was that Comixology are great to work with, but that Independent Comics are pretty much overlooked in the store amongst the Marvel and DC titles. I also met Justin Mound, of Lushcomics.com who is creating a Comixology type store for Indpendent Comics, something to follow up on our return to the UK. 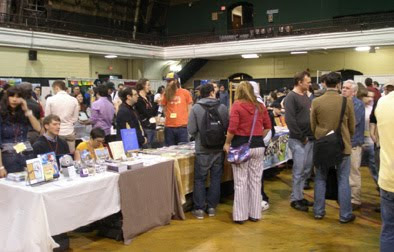 At the end of the second day, creators at Mocca are asked to donate some comics to those people who helped set the tables up etc, as they did this for free. We donated a few but had to keep some back as we wanted to give some to the people at Midtown Comics. 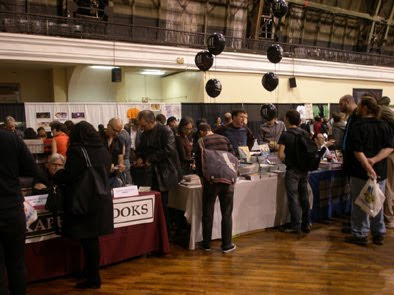 During the two days of the Con it quickly became apparent that Midtown Comics sold quite a few of our books. A good number of our customers at the Con had bought some of our books before, and when asked where they'd got them, the answer was always 'Midtown Comics'. We decided that we would take some variant cover 'The Fall Of The Wolfmen' editions and give them to the manager of Midtown Comics as a thank you. It's always sad walking away from a Convention. We'd had two great days, meeting creators, meeting readers, networking and buying comics. Before we left however we made sure that we'd booked the same table for next year, 14th and 15th April, so hopefully we'll be seeing most of them again. 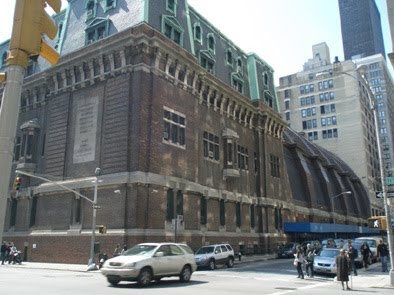 The day after the Con saw us hot foot it to Midtown Comics, where we actually did get to meet the manager (a bit of luck that he was in their store and not in their offices) and thanked him for stocking AccentUK books. A very nice bloke who knew of us and our work. We then took the Subway to The Strand where we spent cash as if our aim was to try to replace the weight lost from our suitcases, from selling comic books, by buying new ones. The flight home was as painless as the flight out, and soon enough we found ourselves once again in the UK. A great trip, a great city and a great Comics Convention... I even managed to get some decent cups of Earl Gray Tea. What more can you ask?
You can see my personal write up over on my blog, as well as find report on Maurice's blog, and the blog of Olivia Pelaez, both of whom will hopefully be contibuting to future anthologies.