We never do particularly well at Thought Bubble conventions. We don't know why, unless it's due to the incredible number of great comics on other stalls competing for the customers' pennies. But the cold fact is that Thought Bubble is our usually our worst UK Con.
Or it has been until now.
This year we were determined to break the cycle and timed the launch of three new books to coincide with the event, as well as enlisting support from a couple of extra creators for the full two days. Oh and there was the surprise in store for people outside the hall as mourners of Thaddeus Mist entertained.
Where to start then ?
OK, the beginning.
Saturday morning was cold and damp, and following a typical Holiday Express breakfast I stepped out, accompanied by my daughter, Jemma, to lug four boxes of comics from my car (on the 5th floor of the multi-story car park) to the venue. That and a few extra bits and pieces, the banner, the raffle prize (a piece of original Gary Crutchely WesterNoir art, which I was not at all happy to part with), and some Thaddeus Mist posters.
A few trips later, I am getting weaker as I get older, and we were all set. 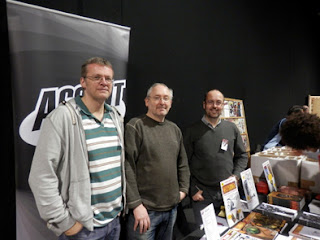 That is we would be once the three new books arrived, and as is typical, we'd left it all so late that Stuart Gould, of CITRUS CREATIVE & UK COMICS CREATIVE, was bringing a number of boxes of each to the Con for us.
And there he was, with a smile on his face that told me that once again he'd come through for us.
A few trips to his car later and we now had more boxes under the table than could really fit and a whole load of comics to shift, but what great looking comics they were. Who On Earth Was Thaddeus Mist ?, WesterNoir 2 and Missing - Have You Seen The Invisible Man ? all looked fab.
Owen Johnson, the driving force behind Thaddeus Mist and Gary Crutchely, the driving force and artist on WesterNoir arrived pretty soon after all the hard work lifting and shifting boxes, and helped set up what stock we had on an over crowded table.
And then Colin turned up expecting help carrying his three boxes of stock from the car park. I think one look at my tired expression helped him to decide that he'd best do it himself and so by about 10.30am we were all ready to go, with even more comics on the table.
Our best sale of the day was pretty much our first as a customer bought pretty much one of every book we had (leaving out the few he had brought from us before), a fantastic start to what turned out to be a very busy day. Owen and Gary helping energise Colin and I, and Gary's special sketch packs really doing well to clinch the deal with anybody who hesitated over whether or not to buy both issue 1 and 2 of WesterNoir.
The actors that Owen had persuaded to come down from Carlisle and act out the Thaddeus Mist Funeral scene were on stage, we'll in the area between the halls, around lunchtime and they were really very good.
I didn't know what to expect but must confess that I feared the worst. How wrong could I have been ? They were great, and certainly helped generate interest in the book, and additional sales (thanks guys .. and girl).
I won't attempt to list all of the contributors to Thad who stopped by, but it was nice to see designer Danielle Horton at what I believe to be her first ever Con.
An incredible day drew to an end and we almost collapsed. It had been a draining but very rewarding experience. 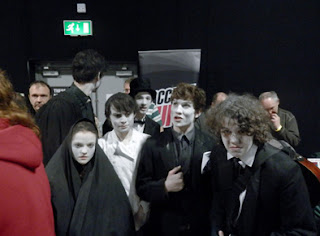 A quick trip back to hotels to refresh and then we were off out to meet up with Sumyra of Lucky Target Comics and her crew at The Palace. A pub that was allegedly only 10 minutes away. Thirty minutes, a walk down by a canal and a rat sighting later and we all knew that I'd taken us in the wrong direction. But everybody was understanding and decided not to throw my into the canal (or river... it was too dark to tell) and so a mere 30 minutes later we were sat in the pub drinking and waiting for the food to arrive. A great night followed talking about comics and telling convention stories.
Sunday was a quieter affair, as Comic Cons always are, but we still did pretty well, and at the end of the day we'd had probably our most successful Con ever, not just from a sales perspective but also in meeting creator friends, and chatting about and developing new projects with a couple of them.
We got Biff (of ACE Comics) to draw the Raffle ticket, and number 300 came out of the hat... the winner has since been emailed, and I'm already missing the artwork that used to sit in my room.
All that's left then is to thank everybody for making it such a great Con. Gary and Owen for all the help, The Funeral Mourners, creators popping over to say 'Hi', Chris for being Chris and all those who stopped by to chat about our books and buy a couple.
See you all again next year.
Posted by Dave West at 14:32

Email ThisBlogThis!Share to TwitterShare to FacebookShare to Pinterest
Labels: Invisible Man, Thought Bubble, WesterNoir, Who on Earth Was Thaddeus Mist?