I don't often plug the work of others on the Accent UK blog, or my own, as I come across so many good comics and I know that I'd miss someone out and offend them.
But there's always the exception to every rule.
Jenika Ioffreda is one of the hardest working comic creators working in the UK, and one of life's genuinely good people.
Great news then that he collected Vampire Free Style is in this month's PREVIEWS catalogue from Diamond Distribution, which is what comic stores use to order comics for their store.
Now, just because it's in there doesn't mean that your local comic store is bound to order a batch. Sadly comic stores cannot afford to spend much on comics that aren't part of the latest Marvel crossover event or DC reboot, so if you want to get a copy then you'll need to make sure that your local comic store is aware of the fact, and orders a few copies in.
Here's Jenika's flier for reference, which quotes the Diamond code, to make it as easy as possible for you... 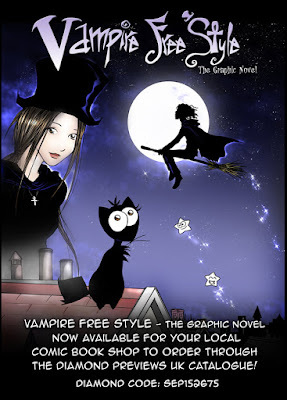 You'll thank me for pointing it out to you once you've read it...
Posted by Dave West at 07:08