I sent a couple of copies of Robot Shorts over to the Burnt Weiner crew, in the hope that they'd enjoy it and also mention it on one of their podcasts ... looks like I got 2 out of 2 and you can hear what they thinik of it over at http://www.burntweiners.com/2012/02/26/burnt-weiners-episode-105-i-vampire-batman-robot-shorts/. Thanks for the words of support and encouragement guys, you certainly picked up on the intention behind the whole thing.
Posted by Dave West at 11:22 No comments:

An Astonishing Tale of a Titanic Team-Up in the Mighty Marvel Manner!!!!!

The “London Super Con” was nearly upon us. Careful preparations had been made, well, at least a few days before and the operation finally swung into action.

We all met, that is, Colin, Scott and I late evening at Upton Park Tube Station, a location dangerously close to the Convention Venue at The Ex Cel Arena and by sheer coincidence near to my rented house in the East End – acquired some months ago under the auspices of accommodation for a “Property Consultant”. They never suspected. Not even once.

Low key greetings were exchanged and I noted that the stock was deviously hidden away in personal luggage carriers of a size usually only reserved for Colin’s large selection of questionable hats that appear on Convention weekends. Scott sensibly declined such apparel. The passing evening travellers were oblivious to our activities.

Dave West was sadly back at Accent UK HQ “somewhere” in the North of England but thanks to the miracle of modern mobile telecommunications (and even with Dave’s antiquated handset) directed operations with all the finesse of 1960’s spymaster Nick Fury (and knowing Dave’s penchant for the theatrical he was probably unshaven and wearing an eye patch whilst chewing on an unlit cigar the entire weekend. Indeed I must ask Jemma to confirm that some time).

Before leaving base, Colin and I donned Archivists’ paper gloves, placed the Photo in a temperature controlled container secreting it in a secure location “very close” to my Upton Park digs.
Then together with Scott we set out to walk to Ex Cel for Day Two. A leisurely stroll in the sunshine given that we did not have to haul any Accent UK stock.
The Stand was quickly prepared, more money was spent in Costas and Scott re-scouted the dealers for bargains while Colin and I recounted our Photo with Stan tale to anyone within earshot, who was passing, or who had a pulse.
After Saturday’s success the Stand was barely covered with books. Fortunately Kev Mullins arrived with some stunning prints of his “Predators” Cover. In two colour schemes no less. They were beautiful but more importantly they filled space. Lots of space.
A more pressing question tasked our minds however; How could we even equal yesterday’s Stan Lee Experience let alone exceed it?
I decided to take a back, neck and head massage in the Convention Hall from the lovely Rosita whilst I pondered the matter. Colin said the massages were free but then Colin is Scottish and doesn’t like paying for anything. It wasn’t free but it was worth every penny of the £10.00 I handed over as under the relaxing influence of Rosita’s ministrations I vowed to attend Stan’s farewell Panel.
Not an easy task if the preceding day’s attendance for his panel was anything to go by.
Early afternoon arrived and as we had sold everything we spread out Kev’s Prints across the table and we sold most of those too. Scott and I mixed with the crowd pulling out some last minute discounts – Scott showing particular aptitude and an eye for a bargain. Scottish DNA I guess.
The time to queue for the Panel came around and the problem presented itself; a long queue of Convention Attendees in the “may possibly get in but you’ll sitting at the back” line and a shorter “I have bought a VIP Tier Ticket to get preferential access” line.
I approached the Panel-Door-Staff-Security-Guy. I was confident that my good looks, easy manner and famous well dressed appearance would win the day.
(Actually I flashed my pass, told him I was an Exhibitor and he let me join the preferential queue.)
This time Colin declined to join me as most likely Paternal duties were pricking his conscience this time around.
We were allowed into the Panel Room and I secured a seat in the third row, slap bang in the centre. Pole Position. The crowd buzzed with excitement whilst waiting for the Panel to begin. Eventually the MC announced his entrance and in he waltzed accompanied by a fully suited Iron Man. Very impressive.
Stan took the cheers, he took the applause. He then said a few words to the masses that made you feel good about doing it and that really he was applauding you! Boy can this guy play the crowd.
The Panel was a question and answer affair from the audience. Most of the questions were a variant of the “who’s the best character you ever created Stan?“ type. The Man continually produced a funny but informative answer to each and everyone. He let slip that his Avengers Movie cameo was the best yet in his opinion and asked us all to give Andrew Garfield a chance as the new Movie Spider Man.
You said it Stan, I’ll do it. (Even if the guy looks as if he is about to burst into tears in every picture I have seen – not a great quality for a superhero…)
Marvel are working on Black Panther and Doctor Strange Movies right now. Music to my ears. Bring ‘em on. He paid tribute to Batman and his friend the late Bob Kane. He told us about his influences, how much he admired Alan Moore’s work and acknowledged the work all his artistic
collaborators had done in answer to a question “What’s the best costume you ever created” Duh, he’s a writer, mate.
Inevitably the end approached. Stan told us what a great time he’d had, asked us to petition the Queen for his Knight Hood ( I’m all for that one. What would you rather have; the sadly inevitable Sir David Beckham or Sir Stan Lee??).
He also said he would love to come back. I would love him to come back because if the London Super Con happens again how on earth do you top Stan Lee?
The Panel ended. Stan said goodbye. The fans gave him a deserved standing ovation with rapturous applause and we all crowded around the desk just to be near the guy.
Colin and Scott watched the final part of the Panel from the back of the room and as we returned to the Stand for the close of the Con we considered in amazement how a guy who is 90 this year can hold thousands of people in his thrall simply by force of personality and those same people’s
acknowledgement of the creative force that he represents.
Think of it; if Stan Lee hadn’t created the Fantastic Four in acknowledgement to Martin Goodman’s request for a “Super Team” comic book then this entire Convention wouldn’t have taken place, the world’s movie calender would be completely different in the 21st Century and all
our lives would be that much less rich – culturally speaking. And so on and so on.
Incredible, simply incredible.
February 25th 2012 the day me and my best mate
met Stan “The Man” Lee.
Don’t you forget it because we never will.

Just been tweeted by Scott saying that there are only four books left on the Accent UK stall ... must be a great Con ... good to know that Colin and Scott will be travelling back with empty bags.
Posted by Dave West at 06:10 No comments: 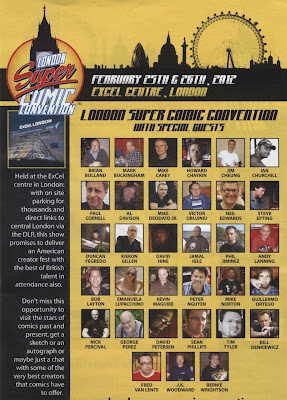 Next weekend Accent UK have a table at London's Super Comic convention, and as you can see from the guest list above it's going to be one hell of an event.
Colin and Scott will be manning the table on both days, sadly I can't make it due to family commitments.
Do stop at the table and say Hi, and have a look out our books.
Posted by Dave West at 06:54 No comments: