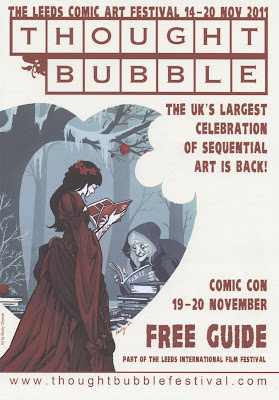 This year saw the Leeds Thought Bubble event grow to two days and add another hall to what had already been a fabulous event. As a stall holder it's always a difficult question to answer, 'Is the second day worth it ?' In terms of sales the answer, in the UK, is typically 'Not really', but it's the second day when most of the networking takes place, and also being over two days typically means an overnight stop, which provides yet more opportunity to catch up with friends and talk comics. 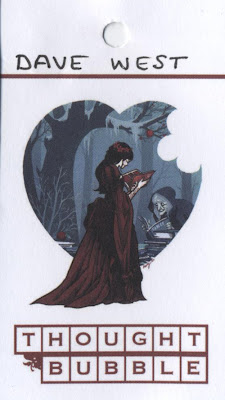 It was great to have Owen Johnson and Kev Mullins lending a hand at the stall, as well as my daughter Jemma, and Kev brought along some A3 prints of his wonderful PREDATORS cover, one version in it's original colouring and the other the version that Andy Bloor 'blued' for us.
The first day was pretty much consistently busy, after the usual hour of not much happening as people found where their favourite artsits would be sitting. As always the best moments for us are when people come to our stall having brought from us before and wanting more. It's the best indication that we're doing something right. All of ours books sold in about the same numbers, with quite a few people asking when Wolfmen 3 would be out.
I managed to pick up a copy of the latest Louis book from Metaphrog as well as the latest copy of Tozo from David O'Connell. I've not read Louis yet but Tozo, now on issue 4, is building up into an intriguing and very nicely illustrated little classic ... and it has giant robots now as well as a couple of tiny ones ... who could ask for more.
The new find for me, and I always come across someone at a Con who I've never seen before and yet their work is so good it seems like they must have been making comics for ages, was Rhys L. Reed, who had the table next to us.

Rhys produces a number of quirky little books and has a great eye for the strange. He had the most interesting stall at the Con as well, and as my wife said after the event... 'Accent UK need to make their stall look a bit fresher', and I'm not about to argue with her :o)
Owen was busy both days talking to artists, who had come to show us their portfolios, with a view to getting artists lined up for our concept anthology, Who On Earth Is Thaddeus Mist?, and I think we've got everything covered now, so hopefully we'll be able to announce the line-up in a few weeks. Rhys L. Reed will be illustrating a story, and I'm really looking forward to seeing his take on the script.
So, all in all we had a great Con, and a big 'Thank You' to all those who stopped by to chat, buy or both. It was a great end to the Con year for us, 'Thanks' also to the organisers for running a great show... 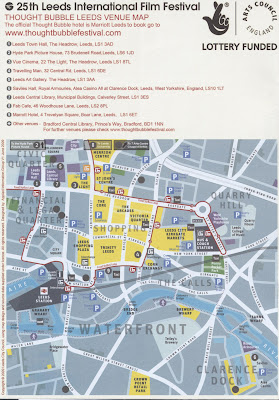