Babble... the one that got away.

When Lee Robson brought his book Babble to our attention a while back, we were interested. Very interested. But while we were taking our time, discussing this between ourselves at Accent UK, Com.X nipped in. Lee knows a good thing when he sees it and so took them up on their offer, and who wouldn't, Com.X produce some great books. 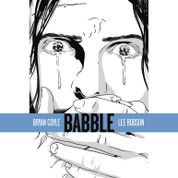 So what is Babble all about ?


Carrie Hartnoll is a girl lost in a life going nowhere fast, until a chance encounter with an ex-boyfriend affords her the opportunity of a whole new career in Ivy League America, as part of a research team attempting to resurrect the language of Babel – a language, it is theorised, that can be understood by any human, from anywhere in the world.


As Carrie pieces together her fractured personal life, she becomes embroiled in the mystery surrounding the apparent suicide of the project’s original team leader, which propels her to uncover the horrific truth about the language and why it was written out of the history books…


Babble is an original graphic novel by Lee Robson and Bryan Coyle (both of whom have produce work for our snthologies in the past) due to be published by Com.X in December 2012.
You can pre-order it from comic shops now with the Previews order code OCT120971. Alternatively, you can pre-order it online here: http://www.babblecomic.com/where-to-buy/.
I've not seen the finished book, but I'll be picking this one up as soon as I see it based on what I saw back when we almost published it ourselves.
Posted by Dave West at 15:07