Accent UK have a table at this year's Thought Bubble Con in Leeds, which is this weekend. 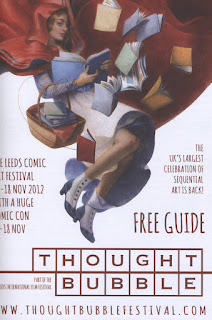 and for the first time ever, we are launching three new booksMissing - Have You Seen The Invisible Man ? is the follow up to Whatever Happened To The World's Fastest Man? in that it is set in the same universe and is another in the Blessed/Cursed line of books. Written by Dave West with art by Joe Campbell.
WesterNoir issue 2 follows on from issue 1 and sees Josiah Black facing aligator men in the swamps of the Mississippi. Written by Dave West and Gary Crutchley with art by Gary.
and...
Who On Earth Was Thaddeus Mist ? a concept anthology that follows the widow of Thaddeus as she attempts to find out who he really was by questioning guests at his funeral. A very victorian drama in every sense. Owen Johnson pulled this one together and wrote the main story with art by Conor O'Boyle, there are a number of other contributors who tell of Thaddeus through the eyes of his friends, relatives and even a mistress.
Over the weekend there will be a raffle for a piece of original art from Gary Crutchley, which recreates the cover pencils for issue 1. A raffle ticket will be given out with every purchase.
Also, we have a limited number of teaser posters for Who On Earth Was Thaddeus Mist ? signed by a lot of contributors that will be given to people who buy a copy of the Graphic Novel, until they run out.
and finally ... look out for actors dressed in victorian garb who will be bringing the funeral to those outside the convention hall.
We'll be at  Table 50 of the New Docks Hall for both days, so do come over and spend some time with us talking about comics.
Posted by Dave West at 15:50

Email ThisBlogThis!Share to TwitterShare to FacebookShare to Pinterest
Labels: Invisible Man, Missing - Have You Seen The Invisible Man?, Victorian, WesterNoir, Who on Earth Was Thaddeus Mist?