Saturday saw us not at Manchester's MCM but at the Central Library in St. Helens.
It's been a bit a repeating theme of the year for us, this clashing of event dates. We had committed to the St. Helens event before we got any confirmation from MCM though and so it was to St. Helens and not into Manchester that we set off on Saturday morning.
Tom-Tom and Col-Col permitting. 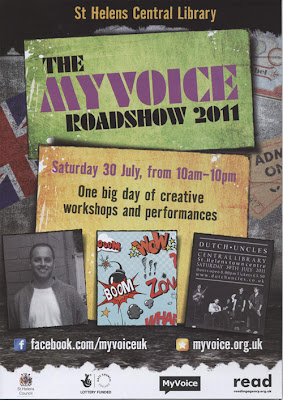 It was our first event of this type. We'd presented as the sadly missed Borders before, but we've never really been put infront of 16 kids and been set the task of explaining how to make comics and from there get them to have a go. 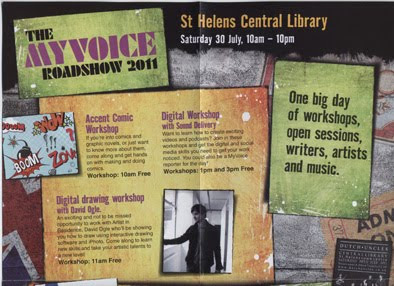 But there we were, having done plenty of preparation and having sounded out my daughter Jemma, who was the average age for the day, we were in fact pretty confident we could pull it off. And we did, I think. Keeping to a 3 panel story we had all of them thumbnailing, panelling, penciling, colouring, inking and lettering their efforts. And for those who had finished we had them designing super-hero costumes. All of the fids were very attentive, all the styles and stories were very different, and a good reflection on the industry as a whole, and all of teh efforts were very impressive. We had a great day.

A big 'Thank You' to the staff at the Central Library in St. Helens for treating us so well, and to the kids for making the event so enjoyable. We'll be doing more of these in the future I'm sure.

In other news, my old laptop has died, formal ceremonies take place next week, and so I've had to set everything up on a new one. Not a problem from a 'files' perspective as they're all on external disks, but it has caused a problem for the wesbite, as I'm having trouble getting CuteFTP to talk to the web provider. I'm working on it, and am now using their support services, but it has resulted in no website updates for a few weeks, which includes Strange Times. Apologies for that.

It's a good job we now have this blog ... and I'm therefore provided with another way to communicate, along with emails of course.