We missed the MCM Con in Manchester last year due to it clashing with an event at a Library that we'd already committed to, and so we had no idea whether it would be good, bad or indifferent. 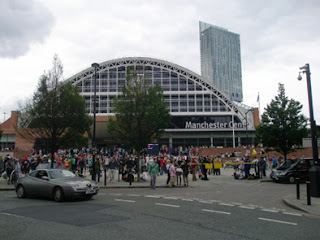 What it had in its favour was that it's a very local event for us, so no trains, no hotels to sort out, no lugging heavy bags of stock across city streets. No, it took us only 30 minutes from Colin's house. Which is why we were late. 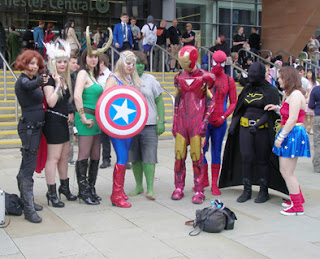 What never ceases to amaze me at the MCM events is the colour, the costumes and the sense of fun from all the people who take the opportunity to dress up like their hero. Colin would love to dress up as Captain America, I know, but we've told him there's an age limit, and he has yet to find out that there actually isn't. There should be, but there isn't. I can rely on the fact that he rarely goes online and so will never see this posting. 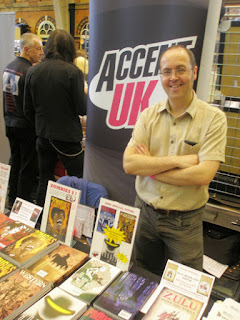 And so there we were. A nicely stocked stall, a banner telling everyone who we were and Colin dressed normally. But would it all count for anything ? We know that the percentage of actual comic readers at these events is quite small, probably around 10%, but with 5000 or more people coming through the door (and they were still queueing to get in at 2pm), that's ... err ... at least 500 potential customers. So, signs were quite promising. 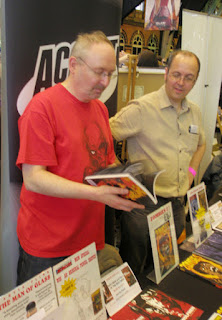 We know that the queue was still there at 2pm because Gary Crutchley was in it.
Once behind the table though he was in fine form. Doing a fab job of selling all the Accent UK books, that he was in, and giving away free sketches and signatures if the customer began to show any hesitancy. 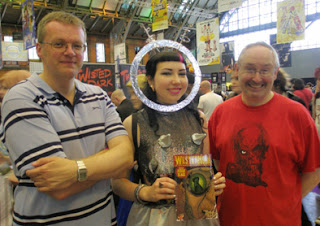 Shauna, The Space Girl from Starburst, teleported down to say 'Hello', it turns out that she's the girl who puts my copy of Starburst in the addressed envelope, for which I thanked her. Actually I think she's employed to pack more than just mine but it was nice to meet her anyway, and give her a copy of WesterNoir as a small 'Thank You'. 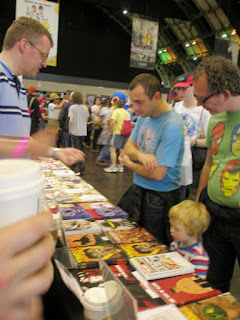 Business was steady all day, with 2OMBIES (Zombies 2) being our best seller, closely followed by WesterNoir, which is great.
Gary got to meet the winner of the KAPOW raffle for his original artwork (I still owe you that £10 Daniel) and we then realised we'd forgotten to raffle of his new one (it was an honest mistake .. really .. although it does look very nice on my wall), which we'll take with us to MegaCon. 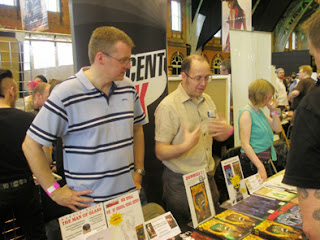 ...and then it was 5pm. The show was over and we'd managed to sell more books than at any other 1 day event before it. A great day, a great range of independent comics on display from all manner of publishers and great sales ... who could ask for more?
We ended the day talking comics over a pint in the oldest pub in Manchester, apparently, with Steve 'Timebomb' Tanner, who had also had a great day. Hope you managed to catch your train OK Steve, see you at Thought Bubble.
Posted by Dave West at 12:19